You may know actress Irma P. Hall as Momma Joe from the movie Soul Food.  Her claims to fame are on a list a mile long, however, perhaps one of her most significant roles is that of a TEACHER.  This real life role may seem to be overshadowed by her Hollywood career, but not to Bray's own Mrs. Davis.  Mrs. Hall was her teacher during a difficult transition in Mrs. Davis's life, and her "role" during that time is one that Mrs. Davis is truly thankful for.  Here is her story:

“Irma P. Hall was my teacher in my senior year of High School.  James Madison would be the new school that I would be enrolled. It was a school that had just been renamed and reopened in 1977.  Before then, I attended a school where I was bullied every day. The principal of my previous school asked my mom to look into transferring my sister and I to another campus where we would have a better chance in  a different learning environment .

During my senior year, I graduated at the top of my class, I was Drill Team captain, Track Queen, Miss Madison, Principal’s Club, Pearls of Troy Charm Club, and most popular just to name a few.

With Irma P. Hall in your life, everybody has a place, the right, and privilege to be anything and go anywhere. 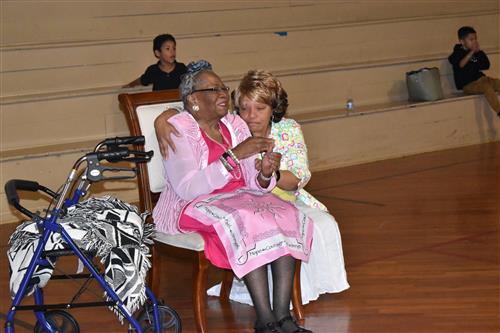 Our Principal, Mr. Barnes, aslo has a very special connection to Mrs. Hall":

“My personal connection is through Momma Irma's goddaughter, Bettye Williams.  After determining that she is a breast cancer survivor, we began an initiative in 2014 that included a luncheon in her honor.  In addition, I discovered that she has a fondness of peach cobbler and that has connected us both as I love making cobblers. As she played "Big Momma" on the movie Soul Food, released in 1997, I knew that she would love "soul food"; therefore, these are the types of foods that we cook for the luncheon.  In addition to the luncheon, we pay tribute to her career passion which is working with scholars as an educator. Scholars that participate in Fine Arts sing "A Song for Momma" by Boyz II Men; she enjoys watching scholars as they share talents. Furthermore, she provides encouragement to scholars to make good decisions as they are the future that will replace her.  Her laughter and stern words mimic a grandmother as she is 84 years old; the wisdom is magnificent and irreplaceable. The stories that she shares from her childhood and days from teaching are definitely "Food to my Soul". 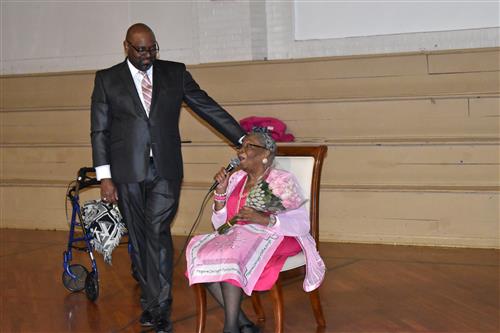