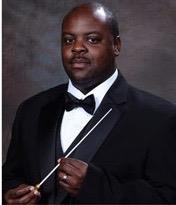 William J. Young is in his fourth year serving as Director of Bands for Cedar Hill High School and first year serving as Fine Arts Coordinator. Prior to his appointment at Cedar Hill, he served as Fine Arts Department Chair and Director of Bands of Skyline Magnet Center in Dallas, TX. He was responsible for the administration of the more than a 250-person program. He conducted the Wind Ensemble and the Skyline Raider Marching Band while overseeing the Symphonic Band, Concert Band and two Jazz Bands. Prior to his appointment at Skyline, he served four years as the Assistant Band Director at David W. Carter High School in Dallas, TX. From 2001 until 2005 and lastly Mr. Young was the Director of Bands at Northwest High School in Opelousas, LA which began his journey as Director of Bands.

Mr. Young is a proud graduate of Southern University and A&M College where he participated in the "Human Jukebox" Band, Symphonic Band, Pep Band and Brass Ensemble. He received a Masters of Education from Concordia University in Austin, TX. Thinking ahead and love for children prompted him to fulfill a need in the community, thus creating the Opelousas All Star Band. Under Mr. Young's leadership, this band competed and won, various awards around the state of Louisiana. From 2004 to 2006, Mr. Young also worked with the Louisiana Leadership Institute All-Star Band. This band also participated in the Rose Bowl Parade in Pasadena California.

Mr. Young is an arranger for several Universities and High School programs across the Southern United States. Mr. Young believes in service to his community. He volunteers his time working with students from across the Dallas-Forth Worth Metroplex with the Dallas-Forth Mass Band. Mr. Young is also an active member in the music education and professional community. He is a member of Texas Music Educators Association, Texas Bandmasters Association, Texas Black Music Educators and Alpha Phi Alpha Fraternity Inc.

Mr. Young is a devoted husband, father and active member of Inspiring Body of Christ Church (IBOC) in Dallas, TX.